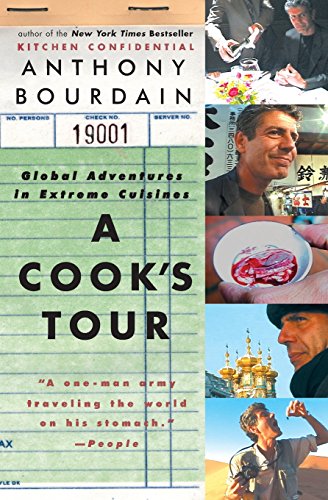 From the star of No Reservations, Anthony Bourdain's New York Times-bestselling chronicle of travelling the world in search the globe's greatest cuilnary adventures

The only thing "gonzo gastronome" and internationally bestselling author Anthony Bourdain loves as much as cooking is traveling. Inspired by the question, "What would be the perfect meal?," Tony sets out on a quest for his culinary holy grail, and in the process turns the notion of "perfection" inside out. From California to Cambodia, A Cooks' Tour chronicles the unpredictable adventures of America's boldest and bravest chef.

Fans of Bourdain will find much to love in revisting this classic culinary and travel memoir.

A Cook's Tour is the written record of Anthony Bourdain's travels around the world in his search for the perfect meal. All too conscious of the state of his 44-year-old knees after a working life standing at restaurant stoves, but with the unlooked-for jackpot of Kitchen Confidential as collateral, Mr. Bourdain evidently concluded he needed a bit more wind under his wings.

The idea of "perfect meal" in this context is to be taken to mean not necessarily the most upscale, chi-chi, three-star dining experience, but the ideal combination of food, atmosphere, and company. This would take in fishing villages in Vietnam, bars in Cambodia, and Tuareg camps in Morocco (roasted sheep's testicle, as it happens); it would stretch to smoked fish and sauna in the frozen Russian countryside and the French Laundry in California's Napa Valley. It would mean exquisitely refined kaiseki rituals in Japan after yakitori with drunken salarymen. Deep-fried Mars Bars in Glasgow and Gordon Ramsay in London. The still-beating heart of a cobra in Saigon. Drink. Danger. Guns. All with a TV crew in tow for the accompanying series--22 episodes of video gold, we are assured, featuring many don't-try-this-at-home shots of the author in gastric distress or crawling into yet another storm drain at four in the morning.

You are unlikely to lay your hands on a more hectically, strenuously entertaining book for some time. Our hero eats and swashbuckles round the globe with perfect-pitch attitude and liberal use of judiciously placed profanities. Bourdain can write. His timing is great. He is very funny and is under no illusions whatsoever about himself or anyone else. But most of all, he is a chef who got himself out of his kitchen and found, all over the world, people who understand that eating well is the foundation of harmonious living. --Robin Davidson, Amazon.co.uk