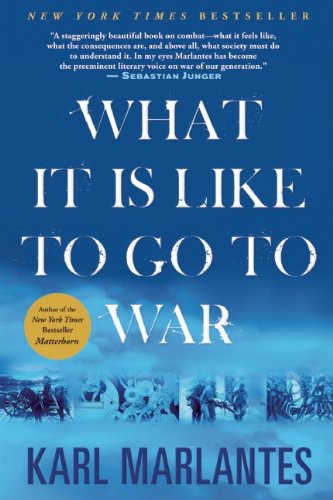 One of the most important and highly-praised books of 2011, Karl Marlantes’s What It Is Like to Go to War is set to become just as much of a classic as his epic novel Matterhorn.

In What It Is Like to Go to War, Marlantes takes a deeply personal and candid look at the experience and ordeal of combat, critically examining how we might better prepare our young soldiers for war. War is as old as humankind, but in the past, warriors were prepared for battle by ritual, religion, and literaturewhich also helped bring them home. In a compelling narrative, Marlantes weaves riveting accounts of his combat experiences with thoughtful analysis, self-examination, and his readingsfrom Homer to the Mahabharata to Jung. He makes it clear just how poorly prepared our nineteen-year-old warriorsmainly men but increasingly womenare for the psychological and spiritual aspects of their journey.

Amazon Best Books of the Month, September 2011: With unflinching honesty, bestselling author Karl Marlantes captures What It Is Like to Go to War in his compassionate, powerful narrative on Vietnam. Marlantes does not shy away from recounting experiences that, outside the arena of war, are horrifying or embarrassing and addresses a soldier’s self-imposed “code of silence” as an attempt to fit back in to a society that “simply wants us to shut up about all of this.” While American pop culture celebrates the warrior spirit and winning the battle, “reconciling the moral conduct we are taught…with the brutal acts we do in war has been a problem for warriors of good conscience for centuries.” Marlantes tempers the brutal truths of fear, power games, and courage with a thoughtful prescription for our soldiers’ well-being; caring for our soldiers and their families differently will benefit society as a whole. In What It Is Like to Go to War, Marlantes sets a new standard for understanding the experience of war. --Seira Wilson