Home › PDFs › Walk On: From Pee Wee Dropout to the NFL Sidelines--My Unlikely Story of Football, Purpose, and Following an Amazing God PDF 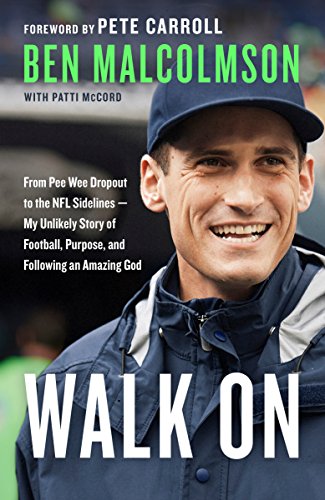 Walk On: From Pee Wee Dropout to the NFL Sidelines--My Unlikely Story of Football, Purpose, and Following an Amazing God pdf html
by Ben Malcolmson and Patti McCord (224 pages)

Had anyone told Ben Malcolmson that he'd someday be a wide receiver on the national champion USC football team--after not playing football since an unfortunate fifth-grade Pop Warner experience--he would have called them crazy. As a reporter for The Daily Trojan, in the spirit of George Plimpton, he participated in walk-on tryouts for the team and was dumbfounded to find himself listed on the roster. His position on the team never amounted to much in a game-time contribution, but Ben felt strongly that his faith was inextricably linked to his purpose. He felt called to anonymously place Bibles in each USC teammate locker on Christmas Eve--to resounding indifference and rejection from his friends. It wasn't until three years later, when his role at USC had led to a role with Coach Pete Carroll at the Seahawks organization, that an old friend connected with Ben and told him that one of the Bibles had captivated the heart of a teammate in the three days before his death.
With a humble spirit dedicated to consistent acts of discipleship, Ben Malcolmson is an authentic voice for the power of simple obedience and trust, for what can happen when a believer allows God to work in a life. Walk On is the result of God using his faithful people to work in the lives of others.