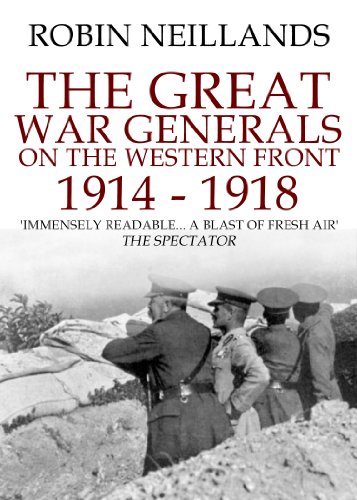 The verdict of history on the British generals of the First World War - Haig, French, Plumer, Gough and Byng - has been damning.

They sent hundreds of thousands of young men to their deaths on the Western Front - often needlessly.

But is it fair?

In this explosive book, Robin Neillands challenges the popular myth about the incompetence and callousness of the Great War generals and examines the battles of the Western Front through the eyes of the officers to explain the circumstances that led them to plan and fight as they did.

The death toll on the Western Front provides the main evidence against the generals but Neillands examines many other factors and spreads responsibility far beyond the generals and their staff, asking the questions:

· Why was Britain so unprepared for a European war in 1914?

· What role did the British politicians play?

· What was the truth behind Anglo-French relations?

· Can the Australians and Canadians really take credit for the great victories of the War?

· Was the arrival of the American army really decisive?

· Was any general really equipped with the knowledge and information to deal with the horrors of trench warfare?

· How much of what we now believe about the Great War is true?

This thoroughly researched and controversial book shatters many assumptions about the commanders who led the British Army through the Great War. It essential reading for anyone who wants to understand the conflict.

‘One of our most readable military historians’ –The Birmingham Post

Robin Neillands is the author of several acclaimed works on the First World War including ‘The Old Contempibles: The British Expeditionary Force, 1914’, ‘Attrition: The Great War on the Western Front, 1916’ and ‘The Death of Glory’.