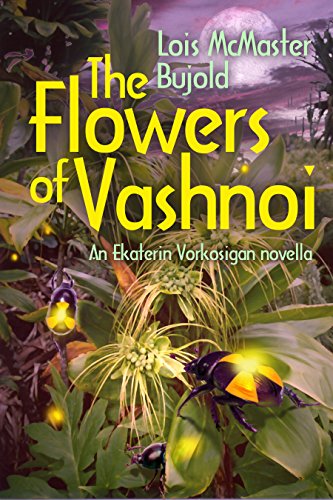 Still new to her duties as Lady Vorkosigan, Ekaterin is working together with expatriate scientist Enrique Borgos on a radical scheme to recover the lands of the Vashnoi exclusion zone, lingering radioactive legacy of the Cetagandan invasion of the planet Barrayar. When Enrique’s experimental bioengineered creatures go missing, the pair discover that the zone still conceals deadly old secrets.

This novella falls after Captain Vorpatril’s Alliance in the Vorkosigan series timeline, but may be read entirely independently. The Vorkosigan saga was the recipient of the first Hugo Award for best science fiction series in 2017.

“Bujold continues to prove what marvels genius can create out of basic space operatics.”
- Library Journal

“Bujold is one of the best writers of SF adventure to come along in years.”
- Locus Magazine

“A superb craftsman and stylist, Ms. Bujold is well on her way to becoming one of the great voices of speculative fiction.”
- Rave Reviews

“Bujold has a gift, nearly unique in science fiction, for the comedy of manners.”
- Chicago Sun Times

Bujold's "work remains among the most enjoyable and rewarding in contemporary SF."
- Publishers Weekly

Lois McMaster Bujold was born in 1949, the daughter of an engineering professor at Ohio State University, from whom she picked up her early interest in science fiction. She now lives in Minneapolis, and has two grown children. She began writing with the aim of professional publication in 1982. She wrote three novels in three years; in October of 1985, all three sold to Baen Books, launching her career. Bujold went on to write many other books for Baen, mostly featuring her popular character Miles Naismith Vorkosigan, his family, friends, and enemies. Her books have been translated into over twenty languages. Her fantasy from Eos includes the award-winning Chalion series and the Sharing Knife series.