Home › PDFs › The Feather Thief: Beauty, Obsession, and the Natural History Heist of the Century PDF 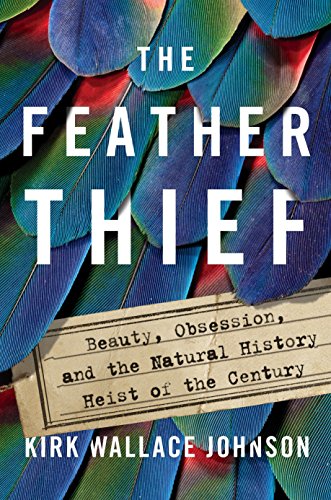 The Feather Thief: Beauty, Obsession, and the Natural History Heist of the Century pdf html
by Kirk Wallace Johnson (320 pages)

“Absorbing . . . Though it's non-fiction, The Feather Thief contains many of the elements of a classic thriller.” —Maureen Corrigan, NPR’s Fresh Air

“One of the most peculiar and memorable true-crime books ever.” —Christian Science Monitor

A rollicking true-crime adventure and a captivating journey into an underground world of fanatical fly-tiers and plume peddlers, for readers of The Stranger in the Woods, The Lost City of Z, and The Orchid Thief.

On a cool June evening in 2009, after performing a concert at London's Royal Academy of Music, twenty-year-old American flautist Edwin Rist boarded a train for a suburban outpost of the British Museum of Natural History. Home to one of the largest ornithological collections in the world, the Tring museum was full of rare bird specimens whose gorgeous feathers were worth staggering amounts of money to the men who shared Edwin's obsession: the Victorian art of salmon fly-tying. Once inside the museum, the champion fly-tier grabbed hundreds of bird skins—some collected 150 years earlier by a contemporary of Darwin's, Alfred Russel Wallace, who'd risked everything to gather them—and escaped into the darkness.

Two years later, Kirk Wallace Johnson was waist high in a river in northern New Mexico when his fly-fishing guide told him about the heist. He was soon consumed by the strange case of the feather thief. What would possess a person to steal dead birds? Had Edwin paid the price for his crime? What became of the missing skins? In his search for answers, Johnson was catapulted into a years-long, worldwide investigation. The gripping story of a bizarre and shocking crime, and one man's relentless pursuit of justice, The Feather Thief is also a fascinating exploration of obsession, and man's destructive instinct to harvest the beauty of nature.

An Amazon Best Book of May 2018: The title of The Feather Thief smartly echoes Susan Orleans' The Orchid Thief, and The Feather Thief has good reason to compare itself to such an admired book. Strange niches of history. Obsessives who refuse to adhere to the law. A writer who stumbles upon a story that becomes an obsession in its own right. All these elements combust to create Johnson's investigation into the theft of 299 rare bird skins from a British natural history museum. While bird skins might sound like (ahem) dry reading, Johnson knows just how to fascinate the reader, plunging with vigor into exotic bird exploration, the crackdown on rare bird trafficking, and the insular world of fly-tying enthusiasts, all of which lead, almost inevitably, to the theft from the Tring Museum. The most likely receivers of the stolen goods? Fly-tiers with an unquenchable thirst for feathers from blue chatterers, the resplendent quetzal, and birds of paradise so they can re-create outlandish Victorian-era salmon flies. Although the thief is caught, Johnson decides to investigate himself what happened to the 106 never-recovered bird skins, pulling the reader even deeper into the thief's bizarre world. Clever, informative, and sometimes endearingly bumbling, this mix of natural history and crime opens up new worlds. You'll never look at a stuffed bird the same way again. —Adrian Liang, Amazon Book Review