Home › PDFs › The Close Encounters Man: How One Man Made the World Believe in UFOs PDF 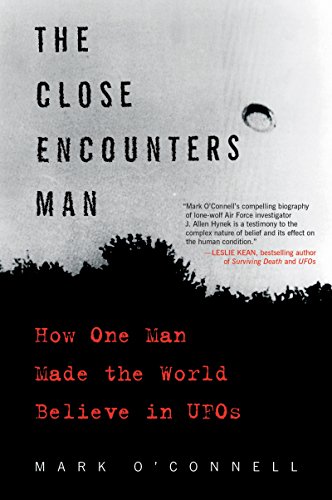 The Close Encounters Man: How One Man Made the World Believe in UFOs pdf html
by Mark O'Connell (419 pages)

The wildly entertaining and eye-opening biography of J. Allen Hynek, the astronomer who invented the concept of "Close Encounters" with alien life, inspired Steven Spielberg’s blockbuster classic science fiction epic film, and made a nation want to believe in UFOs.

In June 1947, private pilot Kenneth Arnold looked out his cockpit window and saw a group of nine silvery crescents weaving between the peaks of the Cascade Mountains at an estimated 1,200 miles an hour. The media, the military, and the scientific community—led by J. Allen Hynek, an astronomer hired by the Air Force—debunked this and many other Unidentified Flying Object sightings reported across the country. But after years of denials, Hynek made a shocking pronouncement: UFOs are real.

Thirty years after his death, Hynek’s agonizing transformation from skepticism to true believer remains one of the great misunderstood stories of science. In this definitive biography, Mark O'Connell reveals for the first time how Hynek’s work both as a celebrated astronomer and as the U. S. Air Force’s go-to UFO expert for nearly twenty years stretched the boundaries of modern science, laid the groundwork for acceptance of the possibility of UFOs, and was the basis of the hit film Close Encounters of the Third Kind. With unprecedented access to Hynek’s personal and professional files, O’Connell smashes conventional wisdom to reveal the intriguing man and scientist beneath the legend.

Tracing Hynek’s career, O'Connell examines Hynek’s often-ignored work as a professional astronomer to create a complete portrait of a groundbreaking enthusiast who became an American cult icon and transformed the way we see our world and our universe.