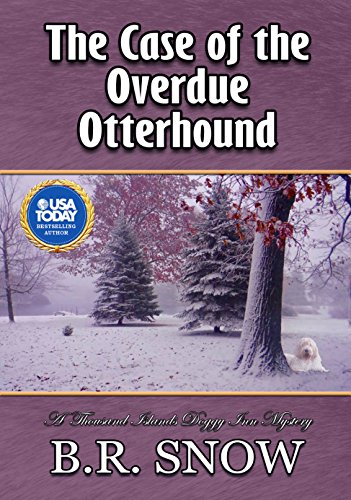 While enjoying a cold but relaxing afternoon of early winter fishing just before Christmas with her good friend, Rooster, things suddenly change when they discover a rare Otterhound that has been caught in a trap. And when they find the dog’s deceased owner nearby, things get even stranger when they’re forced to make a very cold and dangerous trip through frozen marshland and icy water to save the dog and then get home before they and the dog freeze to death. In addition to dealing with a broken leg and the onset of hypothermia, the Otterhound is also pregnant, and Suzy and Josie decide to postpone their departure to the Cayman Islands and do everything they can to save the mom and her unborn puppies.

While trying to piece together exactly what is going on with the dog, Suzy learns that the Otterhound’s owner was the patriarch of an odd family that lives in the middle of the woods without running water or electricity. She also stumbles onto a black-market dog breeding enterprise operating in the area and is shocked to discover that Rooster’s cousin, previously banished to Florida, has returned to the area and is now working for the dog breeding operation in a rather unique role.

To further complicate things, Herman Billows, a representative working for a large energy company, is in the area and doing everything he can to obtain drilling rights to a newly discovered deposit of natural gas. Unfortunately for him, a lot of the land he’s trying to secure the rights on is owned by Rooster and Suzy’s mom, and they’re determined to do whatever it takes to keep Billows from ever getting his hands on it. But Billows, a man who doesn’t like to take no for an answer, has other ideas and is soon making life uncomfortable for everyone except the Friendly family who is more than willing to listen to what he has to offer.

With their trip to Grand Cayman on hold until the Otterhound has recovered, Suzy finds herself in the middle of a strange series of events as well as in the middle of deep snow that continues to fall as winter arrives in full force. Instead of walking the beach, she ends up with various bruises and nineteen stitches, trudging through deep snow on skis, exploring dark caves, and dealing with a unique cast of characters that leaves her grumpy and has her neurons racing.

The Case of the Overdue Otterhounds is the latest installment in B.R. Snow’s popular Thousand Islands Doggy Inn Mysteries and deals with dogs, food, and the power of friendship set in one of the most beautiful spots on the planet.