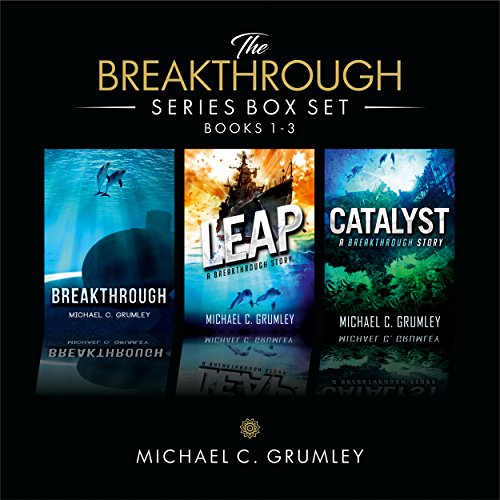 ONE OF THE GREATEST BREAKTHROUGHS IN HUMAN HISTORY.
A SECRET THAT WAS NEVER SUPPOSED TO BE FOUND.
AND A SERIES YOU WILL NEVER FORGET.

Deep in the Caribbean Sea, a nuclear submarine is forced to suddenly abort its mission under mysterious circumstances. Strange facts begin to emerge that lead naval investigator, John Clay, to a small group of marine biologists who are quietly on the verge of making history.

With the help of a powerful computer system, Alison Shaw and her team are preparing to translate the first two-way conversation with the planet's second smartest species. But the team discovers much more from their dolphins than they ever expected when a secret object is revealed on the ocean floor. One that was never supposed to be found.

Alison was sure she would never trust the military again. However, when an unknown group immediately becomes interested in her work, Alison realizes John Clay may be the only person she can trust. Together they must piece together a dangerous puzzle, and the most frightening piece, is the trembling in Antarctica.

To make matters worse, someone from the inside is trying to stop them. Now time is running out...and our understanding of the world is about to change forever.

Facing the cold, clear glass, Alison Shaw stared nervously into the giant seawater tank.
It was just one year ago that she and her team of marine biologists had stunned the world with their incredible breakthrough. And now, they were about to do it again.

But an ocean away, something strange was unfolding. Along a lonely coast in South America, an experimental Russian submarine, long thought to have been dismantled, has suddenly resurfaced. And the U.S. Navy has taken notice, sending officers John Clay and Steve Caesare to investigate.

The sub has been studying a group of unmarked soldiers. Disappearing into the jungle each night beneath the cover of darkness. Something has been discovered...something big.

And it's about to fall into the wrong hands. Unless Alison Shaw and her team can find something that no one else can.

In 1984 a doomsday vault was constructed on a remote island in the Arctic Ocean.
Its purpose was to preserve Earth's genetic history in the event of a global catastrophe.
Now, decades later, a second vault has been uncovered.
This one resting where no one ever expected.
And the problem is...it's not ours.

Yet even more curious than the vault itself, is what lies inside.
Seeds. Millions of seeds. Each with a genetic embryo untouched and perfectly preserved.
Waiting.

No one knows who built it. Or when.
What we have managed to figure out is that whoever it was traveled an immense distance. For the sole purpose of hiding their genetic blueprints on Earth.
But why?

Now a small group of marine biologists and navy investigators have been assigned to find out. Before anyone else does.
But Alison Shaw and John Clay are not prepared for what they are about to uncover.
Beginning with the truth behind our own evolution.