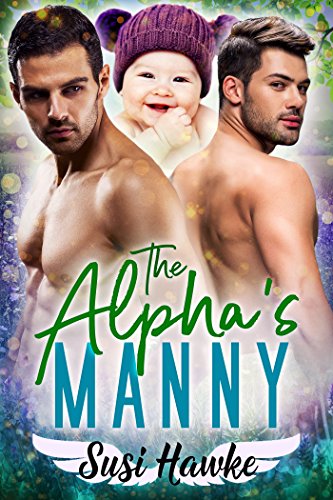 What’s an omega to do when denied custody of his late sister’s baby? Take the job offered to be his manny!

Dusty Williams has the worst day of his life when he wakes up in a hospital bed after yet another miscarriage, only to receive divorce papers and a call saying that his custody bid has been denied for his newly orphaned five-month-old nephew because his father has been located.

Zeke MacIntosh is a flirty, fun-loving, and happily-single bisexual attorney with zero plans to change the status quo. Commitment? Not this alpha! He never looks back or goes for seconds. Hit it and quit it—that’s his motto. Zeke gets the shock of a lifetime when he’s contacted by social services to let him know that a former one-night stand gave birth to his son… and never told him.

He can’t be angry with her though, because she passed away unexpectedly and left his son behind. When he goes to meet his baby, he’s also introduced to a down-on-his-luck omega—who’s not only in the market for a job, but is also the baby’s maternal uncle, and a perfect manny candidate. Never one to think before he speaks, Zeke spontaneously hires Dusty and invites him to live in their home.

The more time that Zeke and Dusty spend together—the more they learn that they simply can’t stand each other. Dusty’s Mr. Perfect ways drive the alpha crazy while Zeke is an uncouth manwhore with no filter who irritates the omega to no end.

Both men stick it out for one very important reason—the sweet baby boy who needs them both. This is a book about making a family and finding joy after loss. Zeke's large, supportive clan is there to give these two a nudge and remind them about what's truly important... family.

Return to MacIntosh Meadows one final time and spend a little time with the MacIntosh clan. Filled with pushy grannies, multiple pregnancies, cute babies, and kids being kids—this book will hit you in the feels and leave you smiling.

This is the final book in the MacIntosh Meadows trilogy and is about 54k. This book contains mpreg, adults adulting in fun & sexy ways, and probably a lot more pottymouth language than should be used in a book with kids underfoot. 18+ readers only please. Trigger warning for miscarriage and loss of a sibling.