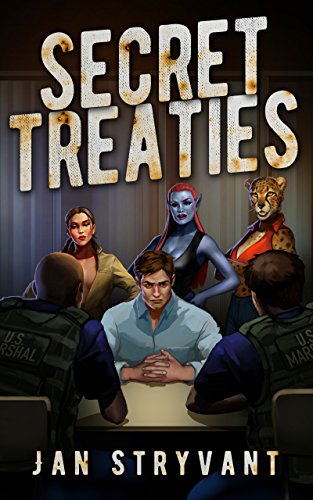 Having killed Gradatim's pet demon, Sean now has to move onto Portland, a true Gradatim stronghold. When the Gradatim breaks the silence with an attack on Sean's family, Sean's response is drastic and immediate, yet the Gradatim cannot help but to escalate their own response. Pushed into a corner, Sean and the Lions' response is both drastic and deadly, sending shockwaves through both magical and governmental organizations.

Forced now into a two front war as Sean has to deal with the consequences of his own actions, other parties start to take an interest in him and his crusade as politicians start to wrangle inside the government and council heads look to settle old scores as well as new ones, doing their best to take advantage of the changing dynamic in their own bids to gain power.

But allies have a way of turning up in the places that you least expect, and when it comes time to take a stand, there are still people who will stand for what is right.

WARNING: “Secret Treaties” contains explicit sexuality, nudity, violence, bad language, arson, robbery, attempted murder, actual murder, military style raids, mass combat, self-defense, pro-active self-defense, destruction of private property, thermonuclear devices, vandalism, breaking and entering, kidnapping, secretive government officials, tantric magic, polyamory, mayhem, demons, people who aim to misbehave, gratuitous sex and violence, and a dandelion that was just minding its own business and being all proud because it was the first dandelion to ever grow in Africa, and some guy just picked it, and now there aren't any again.