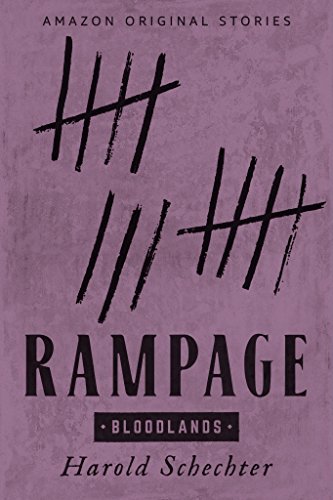 In 1949, things like this just didn’t happen: A quiet New Jersey resident took a morning walk with a 9 mm Luger pistol. In twelve minutes he murdered thirteen neighbors…and then went back to bed.

Howard Unruh went from obscurity to infamy overnight. Even after his obsessive diaries were discovered—a catalogue of simmering rage, petty grievances, and sexual repression—the anomalous crime seemed incomprehensible. Succeeding decades would confirm that Unruh’s “Walk of Death” was just the beginning. The prototype for the modern mass murderer, he would usher in a new age of violence in America.

Rampage is part of Bloodlands, a chilling collection of short page-turning historical narratives from bestselling true-crime master Harold Schechter. Spanning a century in our nation’s murderous past, Schechter resurrects nearly forgotten tales of madmen and thrill-killers that dominated the most sensational headlines of their day.