Home › PDFs › Rally Round the Flag, Boys!: A Novel PDF 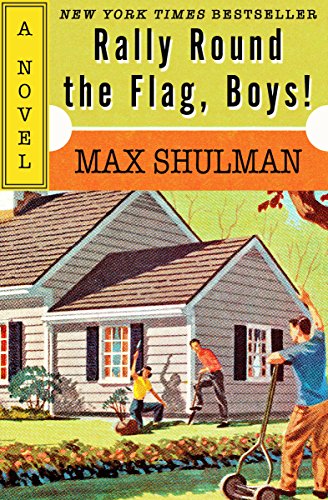 Rally Round the Flag, Boys!: A Novel pdf html
by Max Shulman (278 pages)

Harry Bannerman drinks his nightly bourbon on the train from New York City to Putnam’s Landing, Connecticut. A typical commuter, he has a bald spot, a house, two mortgages, three children, and a wife who is a committed soccer mom and pillar of the community. Harry just wants to curl up on the couch with Grace when he gets home, but instead faces an endless round of PTA meetings, political rallies, little league games, and amateur theatricals.

Second Lt. Guido di Maggio loves baseball less than his last name implies and his fiancée, Maggie Larkin, more than the army allows. College sweethearts, the couple has their future all mapped out: Guido will complete his military service in Maryland while Maggie starts her teaching career in Putnam’s Landing, a five-hour train ride away. But when Guido is reassigned to Alaska and Maggie loses her job for giving a sex talk to second graders, their plans go up in smoke.

To avoid Alaska and save his relationship with Maggie, Guido takes the thankless job directing public relations at a new anti-aircraft base in Putnam’s Landing. What happens next in this national bestseller is a dark and funny story of the disaffected and disconnected in Cold War suburbia as tensions mount between the “invading” army (“invading” Connecticut, that is) and a bevy of local teenagers; between frustrated commuters and their frustrated wives; between social do-gooders and Yankee conservatives; and between romantic dreams of the artist’s life in New York and the pedestrian reality of having to earn a living to house and feed a growing family.