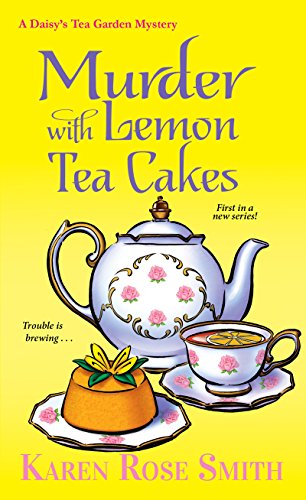 In an old Victorian in the heart of Pennsylvania's Amish country, Daisy Swanson and her aunt Iris serve soups, scones, and soothing teas to tourists and locals--but a murder in their garden has them in hot water . . .
"... readers are immediately drawn to main character, Daisy Swanson, and her beloved Aunt Iris."
- Suspense Magazine
Daisy, a widowed mom of two teenagers, is used to feeling protective--so when Iris started dating the wealthy and not-quite-divorced Harvey Fitz, she worried . . . especially after his bitter ex stormed in and caused a scene at the party Daisy's Tea Garden was catering. Then there was the gossip she overheard about Harvey's grown children being cut out of his will. Daisy didn't want her aunt to wind up with a broken heart--but she never expected Iris to wind up a suspect in Harvey's murder.

Now the apple bread and orange pekoe is on the back burner while the cops treat the shop like a crime scene--and Daisy hopes that Jonas Groft, a former detective from Philadelphia, can help her clear her aunt's name and bag the real killer before things boil over . . .