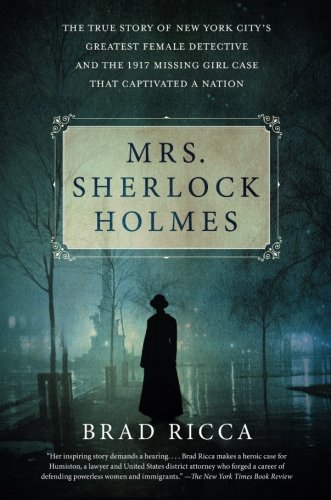 Nominated for the Edgar Award for Best Fact Crime!

This is the shocking and amazing true story of the first female U.S. District Attorney and traveling detective who found missing 18-year-old Ruth Cruger when the entire NYPD had given up.

Mrs. Sherlock Holmes tells the true story of Grace Humiston, the lawyer, detective, and first woman U.S. District Attorney who turned her back on New York society life to become one of the nation's greatest crime-fighters during an era when women were still not allowed to vote. After agreeing to take the sensational case of missing eighteen-year-old Ruth Cruger, Grace and her partner, the hard-boiled detective Julius J. Kron, navigated a dangerous web of secret boyfriends, two-faced cops, underground tunnels, rumors of white slavery, and a mysterious pale man, in a desperate race against time.

Brad Ricca's Mrs. Sherlock Holmes is the first-ever narrative biography of this singular woman the press nicknamed after fiction's greatest detective. Her poignant story reveals important clues about missing girls, the media, and the real truth of crime stories.

Mrs. Sherlock Holmes is a nominee for the 2018 Edgar Awards for Best Fact Crime.