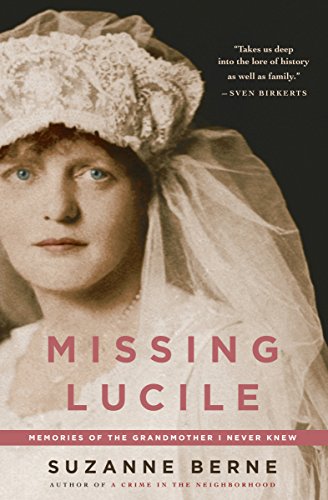 An award-winning author’s reconstruction of her grandmother’s life “takes us deep into the lore of history as well as family” (Sven Birkerts).

Even as a child, Suzanne Berne understood the source of her father’s terrible melancholy: He’d lost his mother when he was a little boy. Decades later, with her dad now elderly and ailing, she decides to try to uncover the woman who continues to haunt him.

Every family has a missing person, someone who died young or disappeared, leaving a legacy of loss. Aided by vintage photographs and a box of old keepsakes, Berne sets out to fill in her grandmother’s silhouette and along the way uncovers her own foothold in American history.

Lucile Berne, née Kroger, was a daughter of Bernard Henry Kroger, the archetypal American self-made man, who at twenty-three established what is today’s $76 billion grocery enterprise. From her turn-of-the-century Cincinnati childhood to her college years at Wellesley, her tenure as treasurer of her father’s huge company, her stint as a relief worker in devastated France, her marriage to a professional singer, and the elusive, unhappy wealthy young matron she became, her granddaughter paints a portrait of a woman and her times, and discovers the function of family history: “to explain what is essentially inexplicable—how we came to be ourselves.”