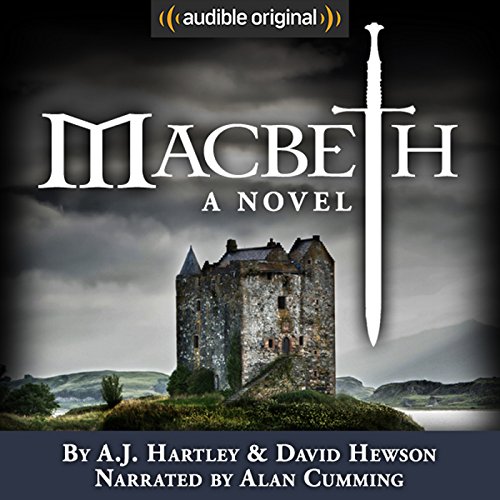 Macbeth: A Novel pdf html
by A. J. Hartley and David Hewson

Macbeth: A Novel brings the intricacy and grit of the historical thriller to Shakespeare's tale of political intrigue, treachery, and murder. In this full-length novel written exclusively for audio, authors A. J. Hartley and David Hewson rethink literature's most infamous married couple, grounding them in a medieval Scotland whose military and political upheavals are as stark and dramatic as the landscape on which they are played.

Macbeth is a war hero and a patriot, doing everything in his power to hold together Duncan's crumbling kingdom, which is beset by sedition from within and with threats from overseas. But when Duncan, contrary to ancient Scottish tradition, turns to building a family dynasty instead of rewarding those who have borne the brunt of the fighting, Macbeth and his powerful wife, Skena, make plans of their own, plans designed to hold both the nation and their strained relationship together. Sinister figures who claim supernatural knowledge spur them on, but the terrible outcome is as much about accident and failure as it is malevolence. Soon Macbeth and his wife find themselves preeminent in all the land, but struggling to hold themselves and their country together as former friends turn into bitter and deadly enemies.

This is Macbeth as you have not heard it before: fresh, edgy, and vital. It is a story of valor in battle, whispering in shadows, witchcraft in the hollows of an ancient landscape, and the desperate struggle of flawed people to do what they think is right.

A. J. Hartley, a professor of Shakespeare at the Univ. of North Carolina-Charlotte, is the author of the "Will Hawthorne" fantasy series as well as several thrillers.
David Hewson is the best-selling author of 16 novels, including the Rome-based "Nic Costa" crime series.

The Irish folk song "She Moved Through the Fair" is performed by Heather O'Neil of the Irish Repertory Theater.