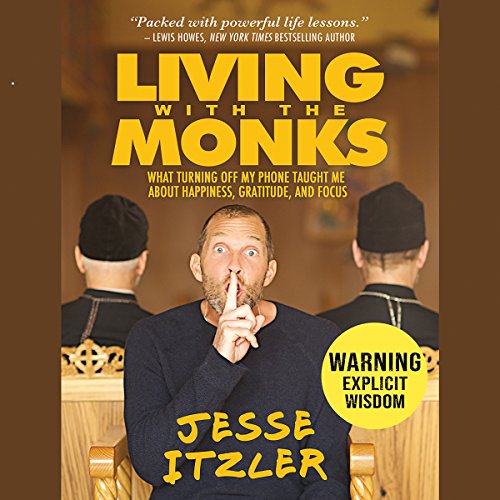 Living with the Monks pdf html
by Jesse Itzler

Entrepreneur and best-selling author Jesse Itzler's next adventure takes him to a monastery where he learns to unplug, pray, and live like a monk.

Thinking all monasteries were like the ones he saw in the movies, Jesse Itzler arrived at the New Skete religious community in remote Cambridge, New York, with a shaved head and a suitcase filled with bananas. To his surprise, New Skete monks have most of their hair. They're Russian Orthodox, not Buddhist, and they're also world-renowned dog breeders and authors of dog-training books that have sold in the millions.

Wait, what? Jesse Itzler living with monks? And dogs? How could that happen?

Between his entrepreneurial endeavors, motivational speaking engagements, charities, and four kids, plus running ultra-marathons and other assorted involvements and activities, Jesse doesn't have a lot of free time on his hands. In his downtime, he's more likely to be in a water balloon fight with his eight-year-old son than in anything close to quiet contemplation. But his daily turbo-tasking was catching up to him, and he found himself overwhelmed and underperforming. When he challenged his wife to a game of rock-paper-scissors during a friend's wedding ceremony he realized he needed an adult time-out.

Most people would take a short vacation, cut back on some daily activities, or get a massage. Not Jesse. He came up with his unique answer to the building stress and dwindling time in his life. In Living with the Monks, the hilarious follow-up to his New York Times best-selling Living with a SEAL, Jesse takes us on a spiritual journey like no other. Isolated in a snowbound mountain monastery surrounded by German shepherds, an intern who walked right off a page from a Stephen King novel, and an odd but lovable bunch of monks who are a cross between Tony Robbins and Cesar Millan, Jesse finds the key to unlocking a life with less stress, more self-reflection (gulp), and greater happiness. (And, as he learns, the key to happiness isn't running. Say what?)