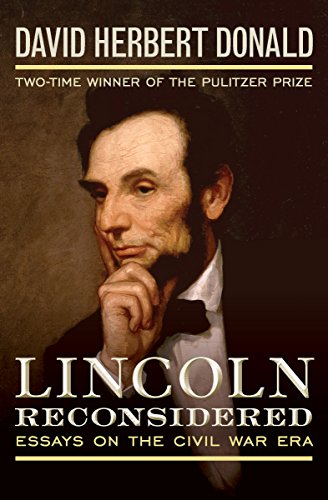 First published in 1956 and revised and updated for the twenty-first century, Lincoln Reconsidered is a masterpiece of Civil War scholarship. In a dozen eloquent, witty, and incisive essays, the author of the definitive biography of Abraham Lincoln offers a fresh perspective on topics previously shrouded in myth and hagiography and brings the president’s tough-mindedness, strategic acumen, and political flexibility into sharp focus.

From Lincoln’s patchwork education to his contradictory interpretations of the Constitution and the legacy of the Founding Fathers, David Herbert Donald reveals the legal mind behind the legend of the Great Emancipator. “Toward a Reconsideration of the Abolitionists” sheds new light on the radicalism of the antislavery movement, while “Herndon and Mary Lincoln” brilliantly characterizes the complicated relationship between two of the president’s closest companions. “Getting Right with Lincoln” and “The Folklore Lincoln” draw on the methods of cultural anthropology to produce a provocative analysis of Lincoln as symbol.

No historian has done more to enhance our understanding of Lincoln’s presidency and the causes and effects of the Civil War than Donald. Lincoln Reconsidered is an entertaining and accessible introduction to his work and a must-read for every student of American history.