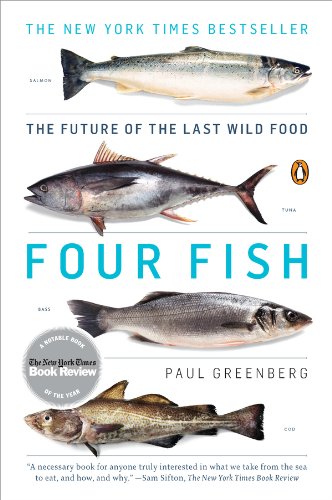 "A necessary book for anyone truly interested in what we take from the sea to eat, and how, and why." -Sam Sifton, The New York Times Book Review.

Acclaimed author of American Catch and The Omega Princple and life-long fisherman, Paul Greenberg takes us on a journey, examining the four fish that dominate our menus: salmon, sea bass, cod, and tuna.

Investigating the forces that get fish to our dinner tables, Greenberg reveals our damaged relationship with the ocean and its inhabitants. Just three decades ago, nearly everything we ate from the sea was wild. Today, rampant overfishing and an unprecedented biotech revolution have brought us to a point where wild and farmed fish occupy equal parts of a complex marketplace.

Four Fish offers a way for us to move toward a future in which healthy and sustainable seafood is the rule rather than the exception.

Paul Greenberg on Four Fish: Fix the Farm, Not the Salmon 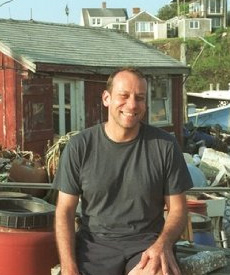 When the New York Times reported in June of 2010 that the US Food and Drug Administration was “seriously considering” approving a genetically modified Atlantic salmon for American consumption the cries from environmentalists and food reformers were, predictably, almost audible on the streets. The AquAdvantage® Salmon uses a “genetic on-switch” from a fish called an ocean pout (a very different animal) in combination with a growth gene from a Chinook salmon to achieve double the growth rate of the unmodified creature. The animal’s creator, AquaBounty Technologies of Waltham, MA asserts that the fish will be sterile and grown in out-of-ocean bio-secure containment structures. Nevertheless the emotional worry of genetic contamination of wild fish, the public preoccupation with health risks a modified salmon could pose, and just the overall ick-factor consumers seem to have about GMO food were all on display across the foodie and environmental blogosphere a few days after the Times article ran.

But, curiously, perhaps the loudest groan that I heard in response to the AquaBounty successes came from salmon farmers. “What I have been noticing over the years,” Thierry Chopin, an aquaculture researcher based in New Brunswick, Canada wrote me, “is that the aquaculture industry is not jumping to embrace what AquaBounty has been proposing.” For years salmon farmers have been waging a public relations war, trying to gain legitimacy as an industry that could be both profitable and produce more food for a hungry world. When a paper published in the journal Nature in 2000 revealed that it took more than three pounds of wild forage fish to grow a single pound of farmed salmon, the salmon industry responded through selective breeding, increased use of soy and other agricultural products and more efficient feeding practices to lower the wild fish use of farmed salmon to the point where some farms claim to have achieved a fish in-fish out ratio of close to 1 pound of wild fish for 1 pound of farmed salmon. When diseases like infectious Salmon Anemia and parasites like sea lice began to run rampant on salmon farms around the world, some regions, like the Bay of Fundy in Canada, instituted better fallowing and crop rotation practices and appear to have had some success in breaking disease and parasite cycles. But in spite of these improvements, a single mention of transgenic salmon in a major media outlet is enough to spoil whatever gains the industry has made in public perception. Indeed, many lay-people I talk with have the impression that transgenic salmon are already a regular part of the farmed salmon market, this despite the fact that there are still no transgenic salmon sold in the United States or anywhere else that I’ve encountered.

Don’t get me wrong. I sincerely do not believe that the salmon industry has solved its environmental problems. But I do think that it suffers an unfair association with the AquaBounty project and that genetic modification distracts from what investment and research really needs to address. The two biggest problems with farming salmon are:

1) Salmon are grown in sea cages, often anchored amidst wild salmon migration routes. This can cause the fouling of waters with wastes and the transmission of diseases and parasites to already seriously threatened and endangered stocks of wild salmon. Selectively bred fish regularly escape and some suggest they may interfere with the lifecycles of wild fish. Even worse, entirely different species of salmon are often raised in non-native environments. Atlantic salmon are regularly farmed in the Pacific and often escape.

2) Farmed salmon consume a huge amount of wild forage fish. Even though feed efficiency on a per fish basis has improved dramatically, salmon farming overall has grown so much that the per-fish efficiency has been all but erased by a much larger overall presence of salmon farming in the world. Atlantic salmon, once limited to the northern latitudes of the northern hemisphere, are now farmed on every single continent save Antarctica. It’s possible farmed salmon escapees may have even reached that most southerly redoubt. Salmon farms exist as far south as Patagonia, South Africa and Tasmania.

So what is the way forward and how do we deal with this transgenic issue? If I were tsar of all salmon farming and could redirect investment money at will, I might take all of those dollars that go into transgenic research and put that money into really confronting the problems that plague the industry. I might look to developing efficient, above ground, re-circulating aquaculture systems. These facilities allow fish to be grown in temperature-controlled environments without any interaction with the wild. Disease transfer and genetic pollution are greatly reduced if not eliminated altogether. Yonathan Zohar a professor and Chair of the Department of Marine Biotechnology at the University of Maryland Baltimore County's has created a test facility right in downtown Baltimore that grows an array of species and even manages to recycle the fish wastes into fuel-grade methane gas that can be used to run pumps or heat water. Though these systems are energy intensive the ability to build them in proximity to markets lessens food miles. Furthermore recirculating systems offer precisely controlled growing conditions and can bring fish to market in half the time as open sea cages.

I might also try to expand on the work of Thierry Chopin who is piloting a program of Integrated Multi-Trophic Aquaculture or IMTA where mussels, edible seaweeds, and sea cucumbers are grown in conjunction with salmon in a complex polyculture. Rather than just trying to make an artificially efficient modified salmon, Chopin is trying to make a more efficient system where multiple crops radiate out from a single feed source. Because mussels, sea cucumbers and sea weed can all metabolize the wastes from salmon, they have a potential to neutralize and reuse the effluent that has plagued salmon farms in the past.

Another place I might put my salmon dollars would be the development of alternative feeds that are synthesized from soy and algae and might eventually obviate the need for using wild forage fish in salmon feed.

Finally, I might consider investing in a different fish altogether. Some critics of the aquaculture industry believe we should do away with the farming of salmonids altogether. But to my eye, there is a very entrenched market for salmon flesh and we might be better served finding a different salmon-like fish that has a smaller footprint. The most hopeful alternative I’ve come across is a fish called the arctic char. The arctic char is from the same taxonomic family as salmon, has pretty good feed conversion ratios, rich flesh, and most interestingly of all, because it frequently finds itself crammed into close quarters when its natural arctic lakes freeze, it has high disease resistance and takes extremely well to high stocking densities—densities that are necessary to make out-of-ocean aquaculture operations profitable. And this is exactly what’s happening with char. Most are grown in re-circulating, above ground tanks in Iceland and Canada.

Of course some people will never embrace a farmed solution for fish. There is a camp that feels very strongly that farmed fish are uniformly bad for the world and inferior on the plate. I have to confess that I don’t always share this opinion. Arctic char strike me as a good environmental compromise and to my palate, they’re pretty tasty.

"A necessary book for anyone truly interested in what we take from the sea to eat, and how, and why." -Sam Sifton, The New York Times Book Review.

Acclaimed author of American Catch and The Omega Princple and life-long fisherman, Paul Greenberg takes us on a journey, examining the four fish that dominate our menus: salmon, sea bass, cod, and tuna.

Investigating the forces that get fish to our dinner tables, Greenberg reveals our damaged relationship with the ocean and its inhabitants. Just three decades ago, nearly everything we ate from the sea was wild. Today, rampant overfishing and an unprecedented biotech revolution have brought us to a point where wild and farmed fish occupy equal parts of a complex marketplace.

Four Fish offers a way for us to move toward a future in which healthy and sustainable seafood is the rule rather than the exception.