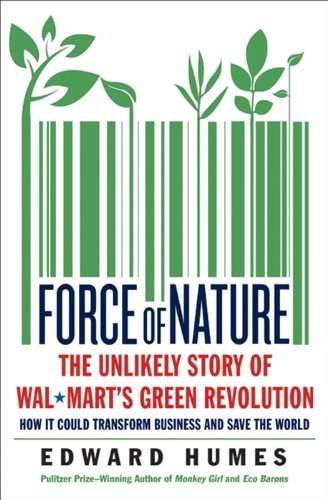 What happens when a renowned river guide teams up with the CEO of one of the largest and least Earth-friendly corporations in the world? When it's former Wal-Mart CEO H. Lee Scott and white-water expert turned sustainability consultant Jib Ellison, the result is nothing less than a green business revolution.

Wal-Mart—long the target of local businesses, labor advocates, and environmentalists who deplore its outsourced, big-box methods—has embraced an unprecedented green makeover, which is now spreading worldwide. The retail giant that rose from Sam Walton's Ozarks dime store is leveraging the power of 200 million weekly customers to drive waste, toxics, and carbon emissions out of its stores and products. Neither an act of charity nor an empty greenwash, Wal-Mart's green move reflects its river guide's simple, compelling philosophy: that the most sustainable, clean, energy-efficient, and waste-free company will beat its competitors every time. Not just in some distant, utopian future but today.

From energy conservation, recycling, and hybrid trucks to reduced packaging and partnerships with environmentalists it once met only in court, Wal-Mart has used sustainability to boost its bottom line even in a tough economy—belying the age-old claim that going green kills jobs and profits. Now the global apparel business, the American dairy industry, big agriculture, and even Wall Street are following Wal-Mart's lead, along with the 100,000 manufacturers whose products must become more sustainable to remain on Wal-Mart's shelves. Here Pulitzer Prize winner and bestselling author Edward Humes charts the course of this unlikely second industrial revolution, in which corporate titans who once believed profit and planet must be at odds are learning that the best business just may be a force of nature.