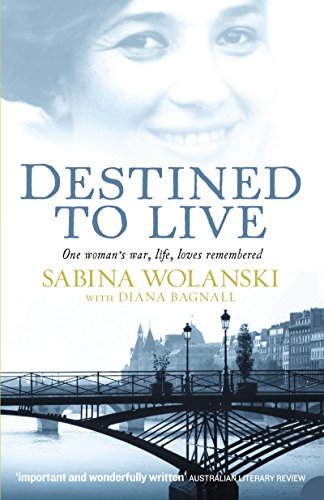 An extraordinary story of courage, forgiveness and reconciliation. Sabina Wolanski was just 12 years old when her home town in Poland was invaded by Nazis. In her diary, along with innocent adolescent longings, she recorded what happened next: the humiliations and terrors, the murder of her beloved family and the startling story of her own survival. Leaving Europe after the war, Sabina forged a new life in Australia, juggling a thriving design business, her family, and an unorthodox love life. But as time wore on, she began asking herself why had she survived when so many died? And what kind of justice fitted such crimes? In May 2005, when Germany opened its controversial Memorial to the Murdered Jews of Europe, in Berlin, Sabina was chosen to speak as the voice of the six million dead. In her speech she noted that although the Holocaust had taken everything she valued, it had also taught her that hatred and discrimination are doomed to fail. Her ability to survive, to love, and to live well, has been her greatest triumph. 'I couldn't put down this engaging, honest story of love, loss and survival.' Diane Armstrong, bestselling author of tHE VOYAGER OF tHEIR LIFE 'important and wonderfully written' Australian Literary Review