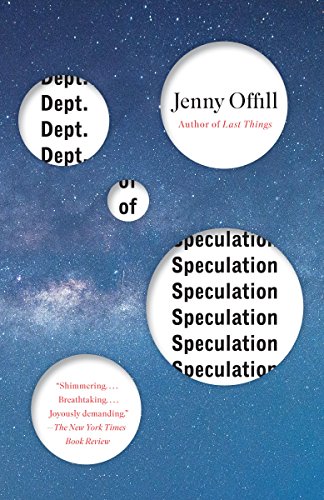 In the beginning, it was easy to imagine their future. They were young and giddy, sure of themselves and of their love for each other. “Dept. of Speculation” was their code name for all the thrilling uncertainties that lay ahead. Then they got married, had a child and navigated the familiar calamities of family life—a colicky baby, a faltering relationship, stalled ambitions.

When their marriage reaches a sudden breaking point, the wife tries to retrace the steps that have led them to this place, invoking everything from Kafka to the Stoics to doomed Russian cosmonauts as she analyzes what is lost and what remains. In language that shimmers with rage and longing and wit, Offill has created a brilliantly suspenseful love story—a novel to read in one sitting, even as its piercing meditations linger long after the last page.