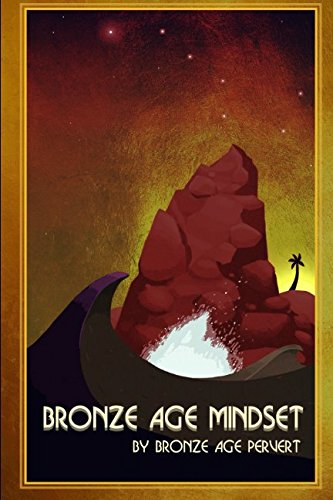 The Atlantic named this author as possibly Steve Bannon's contact in the White House (Rosie Gray, The Atlantic Feb 10 2017: " 'Think you should speak directly to my WH cutout / cell leader,' Yarvin said in an email. 'I've never met him and don't know his identity, we just DM on Twitter. He's said to be ‘very close’ to Bannon...Goal is to intimidate Congress with pure masculine show of youth, energy. Trump is said to know, will coordinate with powerful EOs…"); and a recent Vox article (Tara Isabella Burton, Vox June 1 2018) claimed that he is the "text" to Jordan Peterson's "subtext," and a "distilled" form of Peterson. Distilled means purer: yes, so why not read and understand the purer version? T. I. Burton also adds in this article that this author BAP is a kind of priest-king to thousands on Twitter and outside and is possibly leading a spiritual reawakening. Some say that this book, found in a safebox in the port area of Kowloon, was dictated, because Bronze Age Pervert refuses to learn what he calls "the low and plebeian art of writing." It isn't known how this book was transcribed. The contents are pure dynamite. He explains that you live in ant farm. That you are observed by the lords of lies, ritually probed. Ancient man had something you have lost: confidence in his instincts and strength, knowledge in his blood. BAP shows how the Bronze Age mindset can set you free from this Iron Prison and help you embark on the path of power. He talks about life, biology, hormones. He gives many examples from history, both ancient and modern. He shows the secrets of the detrimental robots, how they hide and fabricate. He helps you escape gynocracy and ascend to fresh mountain air. The pricing, he insisted on against all advice. It refers to the lucky 969 Movement of Burma, led by the noble monk Wirathu. Praise be to the Pervert. Praise be to his teaching of peace. Be careful.