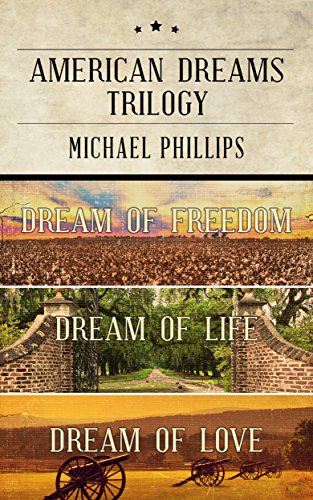 From prolific Christian author Michael Philips comes the trilogy of stories following the Davidson family as they struggle to reconcile their Christian values with Southern values in Civil War era Virginia.

Dream of Freedom: In the antebellum South, Richmond and Carolyn Davidson live lives of ease as wealthy plantation owners. But even though their wealth and livelihood depends on slave ownership, their Christian consciences speak against the practice. When the Davidsons decide to follow their own moral judgment and God’s will by freeing their slaves, they face consequences they never could have anticipated. Risking their lives as an important link in the Underground Railroad helping runaway slaves escape to the Northern states, the Davidsons must rely on their wits—and God’s protection—to stay alive.

Dream of Life: With their beloved plantation, Greenwood, now a vital link in the Underground Railroad, Richmond and Carolyn Davidson must balance the need for safety with their commitment to helping the many runaways who appear at their door. Compounding their danger, the Davidson’s neighbors, the Beaumonts, do not approve of their decision—and view them with suspicion. The danger intensifies when the Davidsons’ older son, Seth, becomes engaged to Veronica, the Beaumonts’ beautiful, scheming daughter—against her parents’ wishes. As the two families are swept up in events leading up to the Civil War, they must choose sides—in a conflict that will change their lives forever.

Dream of Love: As the Civil War rages, plantation owners Richmond and Carolyn Davidson continue to follow the path God set out for them—as an important link in the Underground Railroad, helping runaway slaves flee to the Northern states. Meanwhile, their older son, Seth, is working as a war photographer on the Northern side—and their younger, Thomas, is a Confederate soldier. Torn by war on both sides, the Davidsons pray for both of their sons to come home safe—even as they struggle to keep their land in the face of financial troubles. When Seth is reported missing and feared dead, the family despairs. But his new love, Charity Waters, refuses to accept the news passively. She sets out on a dangerous journey through the war-torn South to find Seth—and bring him home safe.