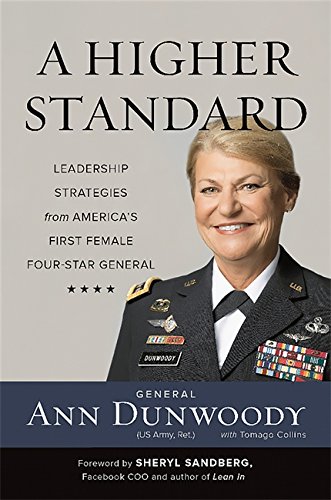 On June 23, 2008, President George W. Bush nominated Ann Dunwoody as a four-star general in the US Army-the first time a woman had ever achieved that rank. The news generated excitement around the world. Now retired after nearly four decades in the Army, Dunwoody shares what she learned along the way, from her first command leading 100 soldiers to her final assignment, in which she led a 60 billion enterprise of over 69,000 employees, including the Army's global supply chain in support of Iraq and Afghanistan.

What was the driving force behind Dunwoody's success? While her talent as a logistician and her empathy in dealing with fellow soldiers helped her rise through the ranks, Dunwoody also realized that true leaders never stop learning, refining, growing, and adapting. In A Higher Standard, Dunwoody details her evolution as a soldier and reveals the core leadership principles that helped her achieve her historic appointment. Dunwoody's strategies are applicable to any leader, no matter the size or scope of the organization. They include lessons such as "Never Walk by a Mistake," a mandate to recognize when something is wrong, big or small, and to hold people accountable. Not only can this save billions for industry, it can
sometimes save the lives of soldiers and citizens. She also advises that "Leaders Aren't Invincible-Don't Try to Be": to be our best, we have to acknowledge our worst. And she encourages readers to "Leverage the Power of Diversity" by creating teams of people from different backgrounds to provide a broad range of ideas and devise the best-informed decisions.

With these and other guiding principles, A Higher Standard offers practical, tactical advice that everyone can use to lead and achieve with maximum success.